On 9 May 2014, the Aarhus Symphony Orchestra will perform music from video games for the first time. Danish magazine Gamereactor invited Thomas Böcker to write a guest article about Final Symphony. 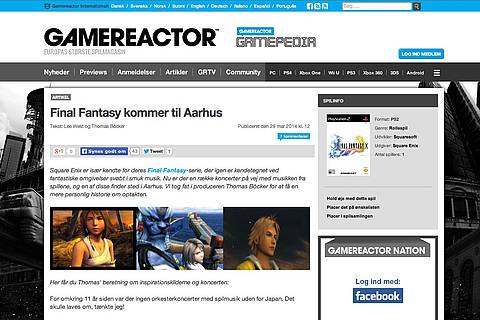 Eleven years after the first video game music concert outside Japan, compositions by Nobuo Uematsu and Masashi Hamauzu will be making their orchestral debut in Aarhus, Denmark. Under the baton of Eckehard Stier, melodies from Final Fantasy VI, VII and X will be presented in arrangements by Jonne Valtonen, Roger Wanamo and Masashi Hamauzu.

In a guest article for the Danish games magazine Gamereactor, producer Thomas Böcker explains his motivations for organising performances of video game music. He also talks about what makes his new project so special: “In Final Symphony we tell the stories of the games through music. The scores will delight fans of the series, but at the same time they are just as interesting for those who have previously had very little to do with the subject of video games.”

The full article by Thomas Böcker is available to read on Gamereactor.dk.