The London Symphony Orchestra will be performing music from the Legend of Zelda series on 13 July 2014. Website CVG spoke to producer Thomas Böcker about the concert. 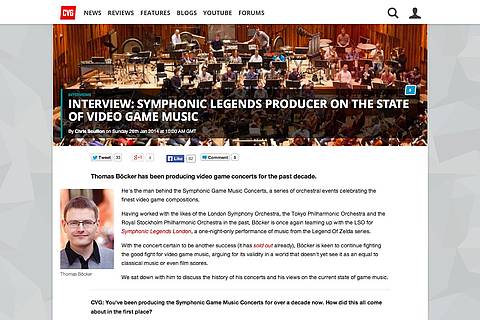 When game music rings out at the Barbican Centre this summer it will be for the second time, the London Symphony Orchestra having already performed its first video game concert in 2013 with music from Final Fantasy. That resounding success was followed immediately by the announcement of a new event: Symphonic Legends London.

The performance is being produced by Thomas Böcker. In an interview with CVG, he talks about how the series began in Leipzig and also goes into the approach of arranging the scores. “It's perhaps best to imagine performing game music like translating a poem: the intention must not be changed. But for the text to function convincingly in another language, you need a large degree of freedom.”

The full article is available to read on ComputerandVideoGames.com.