Back to Sweden: Final Symphony in Stockholm

Since 2006, Merregnon Studios has supported the Royal Stockholm Philharmonic Orchestra with all its video game music concerts. Final Symphony on June 18, 2014 is the latest entry to this successful series! 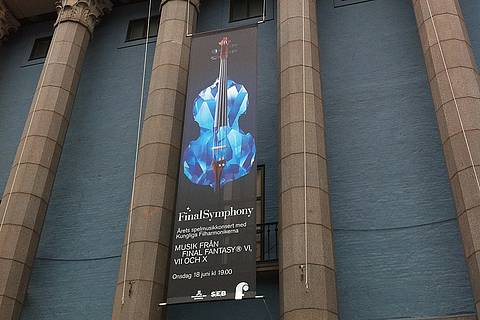 18 June: And another great Final Symphony concert with yet more standing ovations. Thank you very much, Stockholm - many thanks, Royal Stockholm Philharmonic Orchestra!
We are pleased to announce that a video recording from Final Symphony Stockholm will soon be available at www.konserthusetplay.se, where you’ll be able to watch the full performance of Final Fantasy VI - Symphonic Poem in high definition, for free!
(Photos: Video recording, concert starts)

17 June: Lots of exciting photos posted on Twitter today - question is: what makes Final Symphony Stockholm so special? Could it be that Andreas Hanson conducts the orchestra so wonderfully – or is it the brilliant piano performance from Katharina Treutler? Conductor and musicians of the orchestra were full of praise for the pianist. Maybe it’s both!
(Photos: Katharina Treutler at the rehearsal, Konserthuset and Final Symphony, mics?)

16 June: Great to be back in Stockholm! The team is complete - Katharina Treutler also arrived in Sweden today. The pianist and the orchestra performed superbly at the first rehearsals, as expected.
(Photos: Flight to Stockholm, Konserthuset)

15 June: The journey begins. A few members of the team arrive in Stockholm today already. Rehearsals with the orchestra start from tomorrow.

After sold-out concerts in Germany, England, Japan and Denmark, the Royal Stockholm Philharmonic Orchestra, conducted by Andreas Hanson, will perform Final Symphony on June 18, 2014. As with previous concerts in Tokyo and Aarhus, pianist Katharina Treutler will once again be performing a concerto of music from Final Fantasy X.