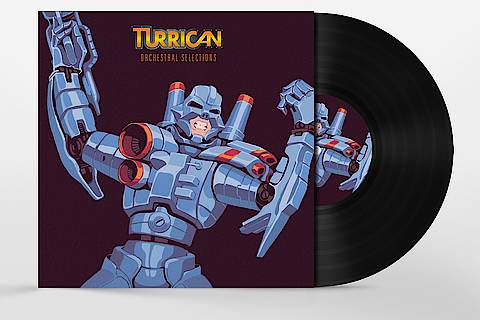 Returning once more to the golden era of 16-bit gaming melodies, Turrican - Orchestral Selections is sure to send nostalgia glands into overdrive with a new album featuring tracks from all three Amiga Turrican games. Exclusively arranged for full orchestra and professionally recorded and mastered to the highest quality, Turrican – Orchestral Selections is a full on aural blast of the very best video game music has to offer.

As part of the Turrican - Orchestral Selections project, Huelsbeck will also be flexing his composing muscles to produce a brand new soundtrack of music, created with his classic sound tool TFMX and recorded on original Amiga hardware. This “virtual” Turrican 4 soundtrack will be Huelsbeck’s ultimate “Thank You” to fans and a fitting tribute to a Turrican game that could have been.

Starting today (June 1, 2017), the campaign seeks to raise $85,000 and offers multiple reward tiers for fans to pledge for. As well as digital downloads, physical CD and vinyl editions of the album, fans can grab art prints, full score PDFs of the arrangements and the chance to attend recording sessions, both in person and via exclusive online live streams.

“The response to the original Turrican II – The Orchestral Album Kickstarter was so incredible that we just had to do it again,” said Huelsbeck. “There are so many fan favourite tracks that we didn’t get to perform on the first album that I really wanted to get our amazing team and a full orchestra back into the recording studio. Not to mention, the chance to create a brand new Turrican soundtrack from scratch is a challenge I’m really looking forward to. If the Kickstarter is successful then I promise to do you all proud!”

You can pledge towards Turrican – Orchestral Selections from June 1 until June 18 by visiting: http://kck.st/2rUQkgo