2015 was a year of superlatives, records and awards for Merregnon Studios. 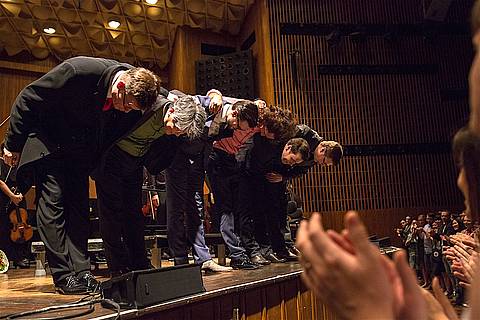 This has been a fantastic year for video game music and we are delighted that we have been able to share with it such an incredible and passionate community of fans.

2015 has definitely been the year of the Final Symphonies, beginning with the worldwide release of our Final Symphony album in February, followed by the world-premiere of Final Symphony II in Bonn. This is Merregnon Studios’ sixth and most recent production of entirely new arrangements and follows Symphonic Shades, Symphonic Fantasies, Symphonic Legends, Symphonic Odysseys and Final Symphony. To date, concerts have been performed in Germany, the UK and Japan, in front of a combined audience of 10,000 eager fans and there are plenty more performances to come.

Some moments of special importance that stand out in 2015 are:

Five concerts have already been announced for Tampere, Amsterdam, Stockholm, London and Auckland. Plus! We are hoping to announce more performances soon.

And finally, it’s a question we get all the time: will there be a Final Symphony II album? Of course we are eager to record one, and while at present there is no official confirmation, we are very keen to make it happen – watch this space!

Our deep thanks go to our loyal fans worldwide who make our concerts possible. We wish you all happy holidays, a wonderful 2016 - and look forward to seeing you at our concerts. We love video game music!