To help celebrate the 20th anniversary of Final Fantasy VI, website Soundtrack Central recently took the opportunity to talk with composer and arranger Roger Wanamo about his work on the Symphonic Poem for Final Symphony. 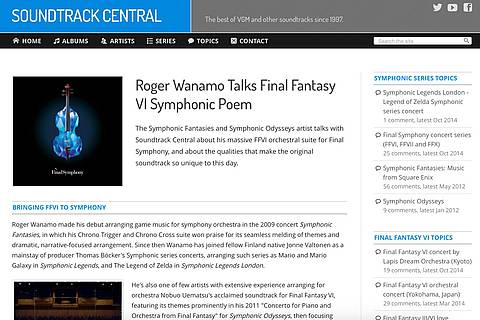 With nearly 40,000 views in just a few days, the Final Fantasy VI Symphonic Poem video recording has become the most successful presentation by far on rspoplay.com, the website of the Royal Stockholm Philharmonic Orchestra. Roger Wanamo, long-time collaborator on the symphonic game music concert series and composer of the Symphonic Poem spoke to Soundtrack Central to discuss his work on the piece:

“My goal is to create a coherent piece where the musical progression feels natural and new themes feel like they belong when introduced.”

The interview with Roger Wanamo also gives an insight into his work for Symphonic Odysseys as well; “I guess the piano concerto ended up with a heavy focus on Final Fantasy VI because when I played it I was totally overwhelmed by it, both by the game itself, with its great storyline, and of course by the music.“

The full interview can be found on the pages of Soundtrack Central.