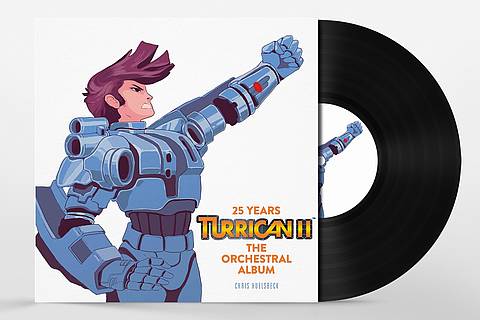 Chris Huelsbeck, one of the most well-known and respected video game composers of the last 30 years, is proud to announce today that he is launching a Kickstarter campaign to help secure funding for a brand new musical project; Turrican II - The Orchestral Album.

Launched to coincide with the 25th anniversary of celebrated Amiga platform game Turrican II, as well as Huelsbeck’s 30th anniversary as a game composer, Turrican II - The Orchestral Album takes one of the most remarkable soundtracks of 16-bit gaming and turns it into the ultimate video game tribute album. Following on the heels of Huelsbeck’s previous Kickstarter success stories – Chris Huelsbeck Piano Collection and the phenomenally successful, four-disc Turrican Soundtrack Anthology – Turrican II - The Orchestral Album will offer listeners a completely new perspective on some of gaming’s greatest pieces of music.

The album will include almost an hour of newly arranged music for orchestra, and features some of Turrican II’s best-loved melodies, including The Final Fight, Freedom, The Great Bath, Concerto for Lasers and Enemies and The Desert Rocks. The score is being arranged by Merregnon Studios’ Roger Wanamo and Jonne Valtonen, who previously worked with Huelsbeck on the Turrican Soundtrack Anthology and his tribute concert Symphonic Shades, as well as the award winning Final Symphony and Symphonic Fantasies video game concerts and albums, and will be recorded in Prague by the hugely talented FILMharmonic Orchestra Prague.

The 18-day Turrican II - The Orchestral Album campaign seeks to raise $75,000 to help secure the arranging, recording and production of the album, and offers a number of different funding tiers. Backers can pledge for one of 1,000 individually numbered, special Collector’s Editions, featuring CD, art prints and two vinyl discs, while one super-backer will experience one of the orchestra sessions live and receive the actual conductor’s baton used during the album recording. Also on offer are digital album downloads and physical CD tiers.

“I have very many special memories throughout my 30-year career as a video game composer, but Turrican II will always be a highlight for me,” said Huelsbeck. “I’ve always wanted to produce a purely orchestral album of music from Turrican II and with its 25th anniversary upon us I’m so pleased that we can once again use Kickstarter’s crowd-funding platform to help make this possible. I’m thankful to all my fans who are just as keen to see this dream become a reality.”

For more information on the Turrican II - The Orchestral Album Kickstarter, which ends on May 28th, and to become a backer, please visit: www.timedate3025.com

Update 1, May 11: Turrican II - The Orchestral Album has already surpassed 50% of the funding goal in just over one day.