Final Symphony storms to success in the States

Standing ovations and a record crowd for Final Symphony’s first ever US tour. 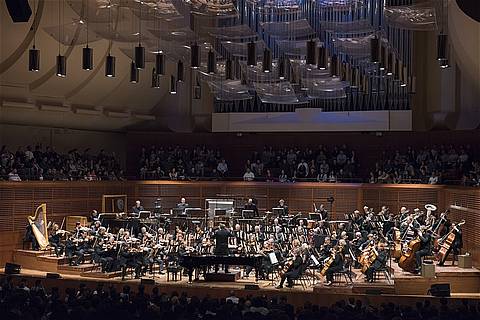 After three stops and over five thousand miles of travel back and forth across the country, Final Symphony’s first ever tour of the United States has been a tremendous success. With multiple standing ovations, incredible fan feedback and the largest ever audience for any of our concert productions it was certainly a musical trip to remember.

With Final Symphony’s unique format of longer pieces and no video screens it was always going to be interesting to see how the American audience would react to something so different, but the hugely positive response means that we are already looking at ways to return to the US to play both Final Symphony I and II in even more locations. As Chris Kohler, Games Editor of Wired and host of the Sakaguchi-san Q&A session in San Francisco, commented:

“Quite a night. Astounding @FinalSymphonyUS performance by incredibly talented @SFSymphony. No Jumbotron, no problem. :)”

And to top it all off, our sold out show in San Francisco boasted a crowd of over 2,700 – our largest ever audience. A fantastic way to round off a ground-breaking, record-smashing tour. We can’t wait to come back America!