Following the roaring success of Final Symphony II’s Japanese debut the concert tour moves on to Finland and New Zealand. 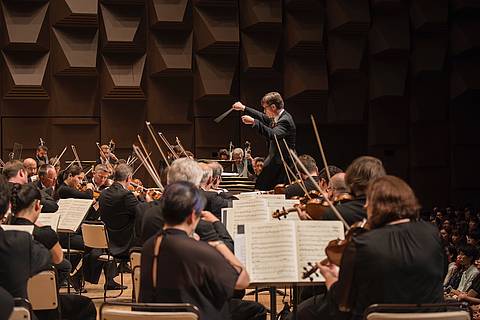 Final Symphony II has just finished its ground-breaking Japanese tour, which saw the London Symphony Orchestra become the first ever non-Japanese orchestra to perform a major video game concert in the country, and the response couldn’t have been more emphatic. Playing to packed concert halls in both Osaka and Yokohama, reaction was hugely positive. While Japanese audiences may be known for reserved and polite applause at concerts, the crowds at Final Symphony II were the complete opposite, with raucous applause and fans on their feet as they praised both the music and the composer hosts of the shows, Masashi Hamauzu and Nobuo Uematsu.

The concerts also featured a who’s who of Japanese video game talent in the audience, including original Final Fantasy producer Hironobu Sakaguchi, as well as famous composers Koji Kondo, Yoko Shimomura, Mahito Yokota and Takenobu Mitsuyoshi. As concert producer Thomas Böcker noted while waiting backstage, “I have never seen Nobuo Uematsu so excited!” and has since promised that the team will return to Japan in the future.

Tickets are also still available for the Amsterdam performance of the first Final Symphony program on May 7, 2016 when the Netherlands Philharmonic Orchestra will perform the music of Final Fantasy VI, VII and X at the world famous Concertgebouw (tickets here).