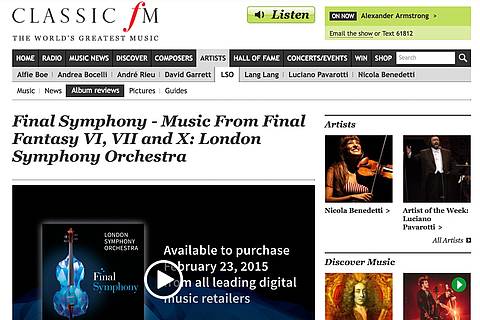 Following its world premiere performance on Classic FM’s Saturday Night at the Movies show, the now critically acclaimed Final Symphony album is returning to the UK radio station as the coveted ‘Album of the Week’, the first time a collection of video game music arrangements has ever been chosen to feature as such.

The unique honour follows a barnstorming first week, which has seen the London Symphony Orchestra performed album hit the top of the iTunes Classical Charts in more than ten countries, including USA, UK, France, Canada, Norway and Sweden, while also topping the Amazon Classical download charts in the USA, France and Germany.

Starting next Monday, March 2nd, you’ll be able to hear extracts from the album played every week day on Classic FM, just after 10am, as part of presenter John Suchet’s show. As Classic FM’s leading presenter, John is no stranger to video game music, having announced Nobuo Uematsu’s place in the station’s annual Hall of Fame top 10 for his Final Fantasy scores the last two years running.

Final Symphony is available now in Mastered for iTunes format, as well as other leading digital retailers, including Amazon and Google Music.