Nobuo Uematsu and Thomas Böcker are presented with Guinness World Records certificates at the end of a fantastic performance by the London Symphony Orchestra. 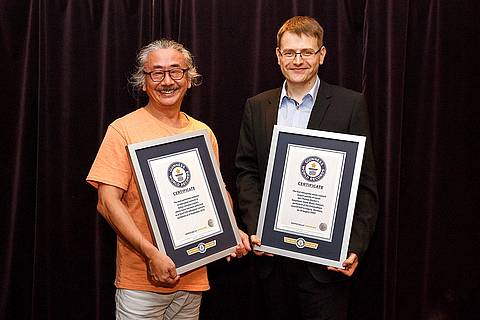 Once again the music of Final Fantasy and the London Symphony Orchestra were brought together in spectacular fashion as Final Symphony II was performed in front of a packed London Barbican this Saturday, September 12. With multiple standing ovations throughout, a breathtaking solo piano performance from Slava Sidorenko, two thrilling encores and the presence of composer Nobuo Uematsu himself it was definitely a glorious evening’s entertainment that will be long remembered by fans who attended.

Thomas Böcker was honoured as the first person to produce a video game concert outside of Japan with his Symphonic Game Music Concert, performed at the Gewandhaus zu Leipzig on August 23, 2003. In another significant first, Thomas Böcker will soon be heading to Japan with the London Symphony Orchestra to perform Final Symphony II in Osaka and Yokohama, making the LSO the first non-Japanese orchestra to ever perform a video game concert in Japan.

Nobuo Uematsu was also officially recognised as the most performed composer at video game concerts. Receiving his certificate in front of a rapturous audience, Nobuo Uematsu was clearly taken back by the surprise presentation, later saying that he was “extremely happy and proud to receive the certificate.”

Don’t forget to check our Facebook page for more photos from the London concert.