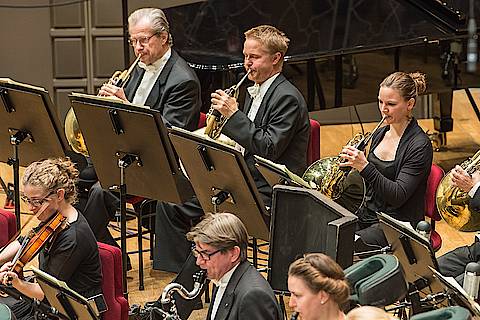 Symphonic Memories brings the timeless melodies of SQUARE ENIX’s legendary role-playing games to Konserthuset Stockholm on June 9th, as the Royal Stockholm Philharmonic Orchestra performs music specially chosen from the award-winning Final Symphony I & II and Symphonic Fantasies concert programmes. As well as themes from FINAL FANTASY VI and FINAL FANTASY VIII by composer Nobuo Uematsu and beloved melodies from CHRONO TRIGGER / CHRONO CROSS by Yasunori Mitsuda to look forward to, there will be an entirely new movement of music from FINAL FANTASY XV composed by Yoko Shimomura.

With soul-stirring arrangements from Jonne Valtonen and Roger Wanamo, along with a stage that plays hosts to the internationally renowned soloist Rony Barrak - in his first concert performance in Stockholm for over 10 years - and conductor Kalle Kuusava, the officially licensed Symphonic Memories will spirit away concert goers on a remarkable, musical journey of pure Japanese RPG magic.

Tickets for the concert start from €29 and can be booked here: Konserthuset.se.

Concerts of video game music have a tradition in Sweden and the Royal Stockholm Philharmonic Orchestra and Merregnon Studios share a long history of working together on such shows, having collaborated on one of Europe’s earliest video game concerts back in 2006. Since then, concerts including Final Symphony I & II and Symphonic Fantasies have all been met with high praise by fans and press, combining the Royal Stockholm Philharmonic’s open-minded approach to new and exciting music, together with its reputation for the highest possible performance standards. The respected Swedish magazine LEVEL concluded in 2014: “It's not always easy to surprise an audience, but Final Symphony is sweet revenge on anyone who thought we already heard the best from Nobuo Uematsu’s tunes.”