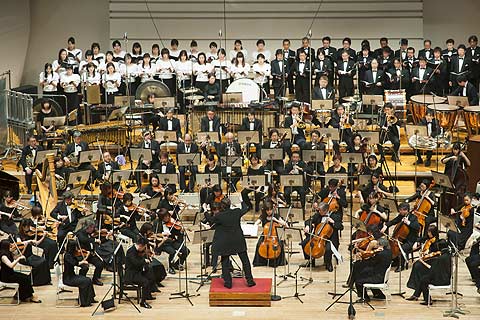 We are pleased to announce that our much loved Symphonic Fantasies Tokyo concert recording will be getting a global, digital release on December 1, 2014 in partnership with X5 Music Group, a world leading distributor of digital music.

Performed in Japan by the Tokyo Philharmonic Orchestra and Chorus, to a sold-out audience of nearly 5,000 eager fans across two nights, Symphonic Fantasies Tokyo takes video game concerts to the next artistic level. Featuring the beloved music of some of gaming’s most popular role-playing game franchises – Final Fantasy, Kingdom Hearts, Secret of Mana and Chrono Trigger/Chrono Cross – Symphonic Fantasies Tokyo is a tour de force of orchestral composition and performance. Conducted by Eckehard Stier and featuring soloists Benyamin Nuss and Rony Barrak the concert’s four exquisite movements, each based on music from one of the featured games, have been expertly arranged by Merregnon Studios’ Jonne Valtonen and Roger Wanamo. In addition, the album boasts both an original Overture and a “Final Boss” Encore that was exclusively performed at the Tokyo concerts.

Universally praised by fans and critics alike, Yoko Shimomura, composer of the Kingdom Hearts games, called Symphonic Fantasies Tokyo “a wonderful experience – I cannot imagine a higher appreciation of my work,” while legendary Final Fantasy composer Nobuo Uematsu commented “for me, Symphonic Fantasies Tokyo is one of the productions that has advanced and refined game music as a genre.”

“The music featured in Symphonic Fantasies has always been very close to my heart, so to be able to bring such special arrangements to sold-out audiences in Japan, particularly the country where this music was first composed, was a dream come true,” said Merregnon Studios’ concert producer, Thomas Böcker. “I’m delighted that people around the world will now be able to enjoy the music with this long-awaited digital release. I’m very excited to be working with X5 Music Group on this.”

More praise for Symphonic Fantasies Tokyo from its composers:

“You can really feel the team’s passion towards game music throughout. For me, without a shadow of a doubt, Symphonic Fantasies Tokyo was one of the greatest concerts ever.” (Yasunori Mitsuda, composer Chrono Trigger/Chrono Cross)

“It was fantastic and thrilling to see the fantasies I developed from everyday life – and the melodies that emerged through my passion – have been performed at Symphonic Fantasies Tokyo.” (Hiroki Kikuta, composer Secret of Mana)

The album is available to purchase from all leading digital music retailers: