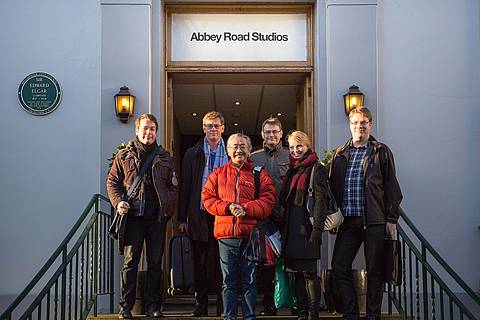 Following the unprecedented, sell-out success of our Final Fantasy video game concert series, Final Symphony, we are pleased to announce that we are working with celebrated composer Nobuo Uematsu and the world-famous London Symphony Orchestra on a brand new digital album recording of the concert for release in early 2015.

Published by leading digital music distributor, X5 Music Group, Final Symphony the album represents a new benchmark in video game music production. Befitting both the composer and orchestra behind the album, Final Symphony will be completely recorded, mixed and mastered at London’s legendary Abbey Road Studios, with Nobuo Uematsu on hand to personally supervise the album’s production. Also featuring the talents of conductor Eckehard Stier and solo pianist Katharina Treutler, both of whom delighted audiences during the award-winning tour, Final Symphony is sure to enchant music fans when it launches globally next year.

In another exciting announcement that continues to reinforce video game music as one the most electrifying and fastest growing genres of classical music, UK radio station Classic FM, the biggest classical music radio station in the world, will exclusively broadcast part of the Final Symphony recording as a world-premiere before the album’s launch next year.

“It is always an honour to hear my work being performed live on stage, but in bringing Final Symphony to Abbey Road Studios I hope that many more people will now be able to enjoy the outstanding arrangements that Merregnon Studios has become famous for,” said Final Fantasy composer Nobuo Uematsu. “To work with the London Symphony Orchestra in a studio that has played host to many of my own personal, musical heroes will be a very special experience.”

“For me, this album marks the ultimate video game music production,” commented Merregnon Studios’ Thomas Böcker, producer of Final Symphony. “It was an absolute musical privilege to work with the London Symphony Orchestra on Final Symphony last year – the orchestra’s first ever live performance of music from a video game – and to have them back in the same room as Nobuo Uematsu at Abbey Road Studios is like hitting the video game music jackpot. This album will showcase video game music at its very highest quality and I can’t wait to share it with the world.”

Final Symphony is an officially licensed series of concerts featuring symphonic music from the video games Final Fantasy VI, VII and X, with exclusive arrangements penned by Masashi Hamauzu, Jonne Valtonen and Roger Wanamo. First performed in May 2013, Final Symphony has enjoyed sell-out success in Germany, United Kingdom, Japan, Denmark, Sweden and Finland, featuring the virtuoso talents of some of the world’s leading orchestras and soloists.

The album also marks the second collaboration between Merregnon Studios and X5 Music Group, following the recent digital launch of Symphonic Fantasies Tokyo, a concert featuring music from Final Fantasy, Secret of Mana, Kingdom Hearts and Chrono Trigger/Chrono Cross and is available to purchase now from all leading digital music retailers such as iTunes.