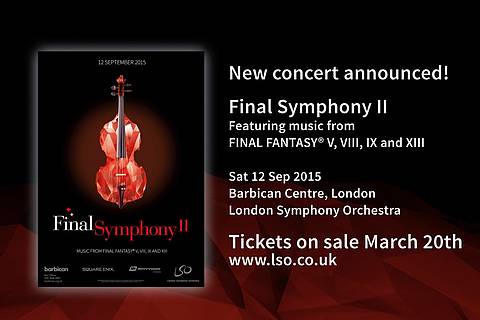 Following a sell-out world tour and hit album, Final Symphony, the critically acclaimed Final Fantasy concert programme from leading production company Merregnon Studios, will return to London on September 12th, with an exclusive, all-new programme of music. Titled Final Symphony II, and performed by the world famous London Symphony Orchestra, this is a concert set to delight fans with a musical programme that takes in some of Nobuo Uematsu’s most treasured themes from Final Fantasy V, VIII and IX. In addition, the Barbican concert will also feature a new suite of music from Final Fantasy XIII, arranged by original composer Masashi Hamauzu himself.

To make the evening even more special, composer Nobuo Uematsu will be in attendance and is set to take part in a ticketed, pre-concert talk. Here he’ll discuss his musical career and influences while answering questions from the audience in what is sure to be a fascinating insight into the world of the video game music.

“It’s wonderful that we’re able to return to the Barbican with such an exciting new programme of music,” said Final Symphony II producer, Thomas Böcker. “Performing the original Final Symphony with the LSO back in 2013 was a musical dream come true, and recording the album at Abbey Road Studios was the icing on the cake. The arrangers, Jonne Valtonen, Roger Wanamo and Masashi Hamauzu have been working very hard on something extremely special and we think it’s exactly what fans of Final Fantasy have been waiting for!”

“We’re thrilled to be welcoming Final Fantasy fans back for Final Symphony II,” said Gareth Davies, the LSO’s Principal Flute, who’ll also be joining Nobuo Uematsu for the pre-concert talk. “Working on the concert and album for the first Final Symphony was a wonderful experience. The music is incredibly epic and fantastically arranged for the orchestra, and it’s hugely exciting to be playing the music of Uematsu and Hamauzu again. We can’t wait for fans to experience it!”

Final Symphony II marks the third concert collaboration between the London Symphony Orchestra and Merregnon Studios, the original Final Symphony having been the orchestra’s first ever live performance of video game music. The LSO also performed on Final Symphony the album, which was recorded at London’s Abbey Road Studios and released as a global, digital download earlier this year. Described as “one of the best video game music albums ever made,” by leading website VGMOnline.net, it went straight to the top of the iTunes Classical chart in more than ten countries at launch, including the UK, USA, Canada, France and Sweden, while also racking up top five Classical Album positions in both the Billboard and Official UK Charts.

Tickets for Final Symphony II go on sale tomorrow, March 20th, from 10am, and range in price from £30 to £65. Tickets for the pre-concert talk by Nobuo Uematsu will also go on sale at the same time, priced at £10 each. To book tickets please visit the official concert site:
www.lso.co.uk/whats-on/icalrepeat.detail/2015/09/12/391/-/final-symphony-ii