Physical edition to launch first in Japan, also available to buy at both Bonn and London Final Symphony II concerts! 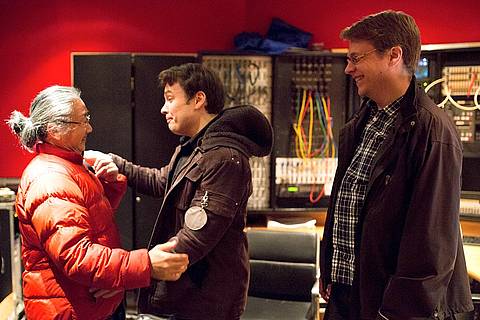 After its successful, chart-topping digital launch earlier this year, the Final Symphony album, performed by the London Symphony Orchestra and recorded at London’s Abbey Road Studios, is finally getting a physical release.

Announced by Square Enix today, Final Symphony will release as a high-fidelity Blu-ray audio disc, featuring 96 kHz/24 bit audio in Stereo and 5.1 Surround sound, and looks set to bring the ultimate Final Fantasy symphony atmosphere to your own home. As well as allowing you to experience the music of Nobuo Uematsu and Masashi Hamauzu at the highest possible quality, the album also contains a collectible, in-depth guide to the arrangements, featuring full colour photography from all the recording sessions.

The album launches across Japan on September 16 for 4.500 YEN (plus tax), but there are also plans to sell the physical album at this year’s Final Symphony II concerts at Bonn on August 29 (click here for tickets) and the sold-out London concert on September 12, enabling lucky fans to get their hands on the disc before the official launch date.

Plans to release the Final Symphony Blu-ray in markets outside of Japan will be announced at a later date.