The journey continues: with Final Symphony in Aarhus

Following the resounding success in Tokyo in front of an audience of 4,600, the journey continues to Denmark the very next day. After travelling for just under 24 hours the team arrives in Aarhus, where Final Symphony will be presented on 9 May. 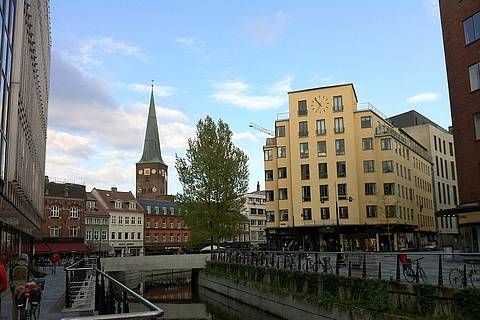 9 May: Concert day!
The premiere of Final Symphony was held in Germany on 11 May 2013. Almost exactly a year later, the concert is now taking place in Aarhus, Denmark. And with resounding success! The audience responds to our sell-out concert with five standing ovations. The orchestra says it has never seen anything like this before!
After a short breather, Final Symphony will be back on schedule in Stockholm on 18 June 2014 with our good friends from the Royal Stockholm Philharmonic Orchestra!
(Photos: Article about Final Symphony, piano concerto with Katharina Treutler)

7 May: Work in Aarhus is progressing well. The revised scores of Final Symphony can be heard for the first time in Europe on 9 May.
But: there is still time for some agreeable trips into the city in Denmark.
(Photos: Rehearsals on day 2, Aarhus cathedral)

6 May: No break - after the team was woken suddenly in the early hours of 5 May by an earthquake, they leave immediately for various connecting flights to Frankfurt, followed by Copenhagen and Aarhus.
The rehearsals for Final Symphony have begun!
(Photos: Off to Aarhus, first rehearsals)

Music from Final Fantasy VI, VII and X will soon be on the programme of the Aarhus Symphony Orchestra. Under the baton of Eckehard Stier, the Danish ensemble and the pianist Katharina Treutler will be performing Final Symphony.